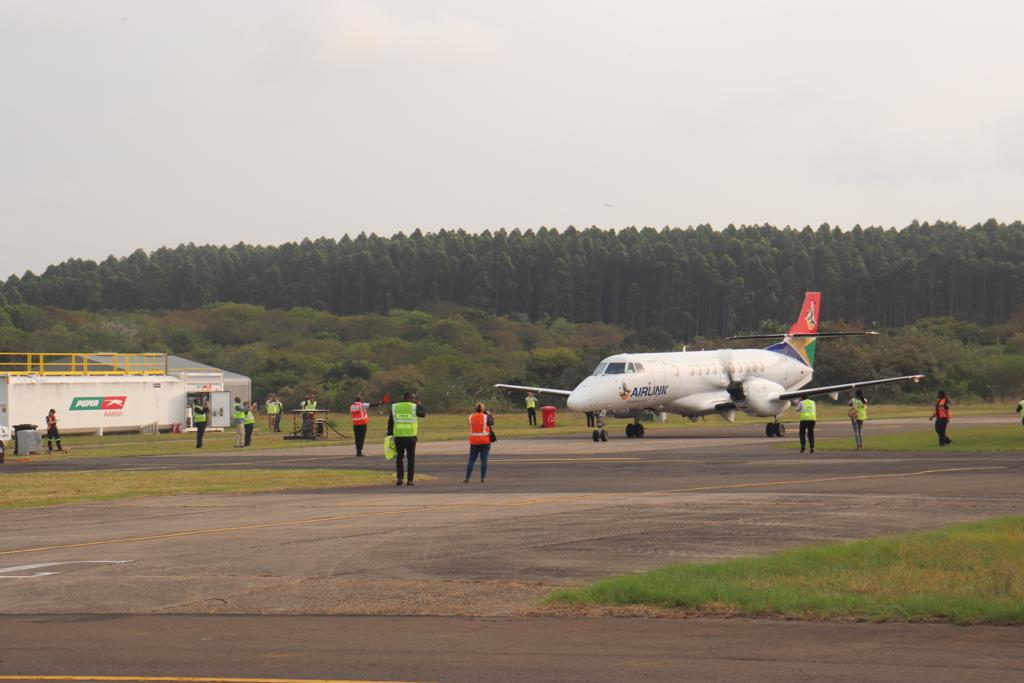 It gives me an absolute pleasure and a sense of joy standing here before you this morning to celebrate this milestone, the re-opening of this airport which has been dysfunctional for close to two years now.

The reinstatement of daily flights follows the securing of necessary resources to accommodate scheduled airline services after an enforced 20-month break.

The commencement of flights in Richards Bay will be of positive value when it comes to growing business in the City. We have been working endlessly to refurbish the recently renovated airport. We can now warmly welcome all travellers, including business and leisure ones.
This will have a positive impact also in the growth of our tourism industry as well as in making business much better and easy as it will be much easier and convenient to connect to different provinces in a short space of time.

The rigorous process involved in getting back the correct licence for commercial flights, which was foreign to many of us. It was a tedious and lengthy process of continuous auditing and compliance checks by the Civil Aviation Authority. However, in the end, and with the assistance of ACSA and the persistence of Airlink as one of our strategic partners, we made it to this important day.
The role played by ACSA proves that organs of state are interdependent and interrelated in many ways. They held our hand and have not yet let go until the airport meets not just the minimum standards but also assists in ensuring the airport thrives and is viable as economic infrastructure.

Let me also acknowledge the Air Traffic and Navigation Services (ATNS). This company is responsible for air traffic control in approximately 6% of the worldā€™s airspace.
As you would know, ATNS Provides vital aeronautical information, that is used for all flight planning purposes as well as search and rescue coordination services, and reliable navigation infrastructure.
Time allocated to me cannot sufficiently address my appreciation and thanks to ATNS, for delivering as per our mutual Air Traffic Services contract. All the necessary infrastructure is in place, experienced human resources have been allocated and are on position. Safety audits as per the International Civil Aviation Organisation have also been performed. So, we are good to go!

Ladies and gentlemen, as you can probably smell and see, the Airport is being renovated to repair several damages. The ultimate goal is to improve the outdated structure into a viable airport poised for economic growth.

The City has made considerable investment to improve the infrastructure in the airport including beefing up security and fire personnel. It brings much needed connection to the OR Tambo international airport which will be of benefit to the international and domestic investment community. It also restores the much needed jobs that were at the brink of being lost.

Various scholars / Researchers found that airport development is linked to economic growth. In turn, economic development is often linked with infrastructure development.
Generally, airports facilitate tourism and trade, provide jobs, and increase revenues from taxes.
Critical medical supplies and organ transplants are also done effectively via air transport.
Therefore, Airports go beyond furthering the local economic development of the City and contribute significantly to Regional Development. They play a crucial role in other sectors, such as health.

Airlink has quickly capitalised on these opportunities and is the first and only Airline to jump in with two daily flights servicing the Johannesburg ā€“ Richards Bay route.
We also noted with excitement that the Airline has expanded its reach to include a flight from Bloemfontein to Richards Bay via Johannesburg.

It is also worth mentioning that the City is also working on a feasibility study for the relocation of the airport to a better space that will maximize its functionality. The study is envisaged to be concluded by the 3rd quarter of this financial year. Once Council approved the study, it will then proceed into procurement, wherein, the City will be looking for a private partner for this important investment.

It has been a privilege therefore this morning to have welcomed a first flight which has landed in this airport with happy passengers who also appeared very excited about this development.

I take it we all know that Richards Bay is vital to the economies of this KwaZulu-Natal province and the entire country. As such efficient transportation system comes at a high demand. We strongly believe that the resumption to function of this airport will help a lot to reignite growth and economic activities in the City of uMhlathuze.

Such would not have been possible without the hard work by our staff at the City of uMhlathuze, various managers, officials, the DMM for Corporate Services Ms Kaywood and all her team members, under the leadership of the City Manager Mr Zulu. Let me not forget ACSA, Airlink and ATNS for being such great partners in this successful development.

In closing ladies and gentlemen, members of the media, the road ahead is still long. The goal is to end up with flights travelling from here in Richards Bay to various important destinations such as Cape Town and East London to mention just the few.
But for now, let us best utilize what we already have, as it is worth being celebrated.