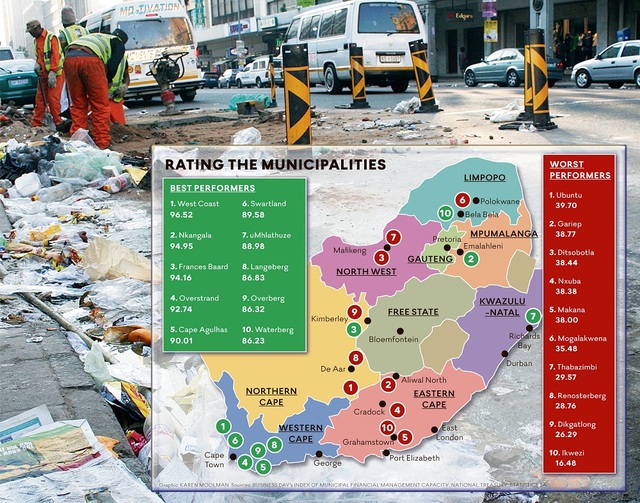 A NEW index compiled by Business Day, tracking how well municipalities nationwide spend their funds, ranked the City of uMhlathuze best of all secondary cities in SA, and top of the lot in KZN.

Among the secondary cities, uMhlathuze is followed by George with 83.8 points. The index allocates each municipality a score out of 100 points based on five indicators: its audit outcome for 2014-15; whether it had a permanent or acting Municipal Manager and Chief Financial.

Officer; how strictly it managed its debtors; whether it under- or overspent its 2015-16 operational budget; and whether it spent its conditional infrastructure grants that fiscal year.

Indicators were selected on the basis of expert interviews and the availability of data. ‘The City of uMhlathuze is pleased with the findings,’ said uMhlathuze Municipality Communications Manager Mdu Ncalane.

‘This reaffirms our bold stance not to deviate from running a clean city, thus resulting confidence boosts to potential foreign investors and the general public who are serviced by the City of uMhlathuze.

‘It is no magic that we are sitting on the fourth consecutive clean audit. ‘It is a reflection of a hard-working team of officials under the oversight of a capable political leadership captained by Mayor Mduduzi Mhlongo.

‘We are equally pleased to score high points on the five indicators, which is an indication that the city strives against all odds to deliver basic services to people on time and spends correctly on its capital and operational budgets.

‘This is another accolade for the city as it strengthens its focus on economic growth through investor attraction, global tourism attraction and catalytic projects that are to bring about good economic spin-offs and results in job creation for the people.’