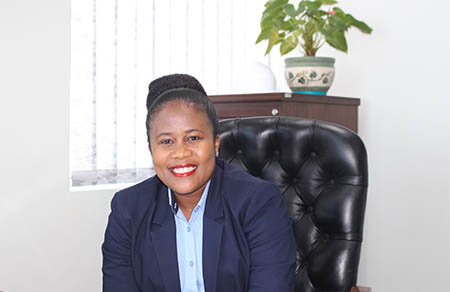 Corporate Services is one critical component in any organisation for its existence, functioning, adapting to dynamic periods as well as the wellbeing of all resources mainly human capital.

The City of uMhlathuze is set for new horizons after securing the services of an experienced, qualified and creative minds in the Corporate Services Department. Ms Lungelwa Kaywood, has been appointed to be at the helm of this strategic section as the Deputy Municipal Manager: Corporate Services, since late 2020.

Ms Kaywood is responsible for coining and driving of the high-level strategy for the City of uMhlathuze and the implementation of programmes of the following units, Strategic Administration, Human Resources and Information Technology, which are the nerve centre of the City.

Ms Kaywood possess a strong Public Finance background with knowledge of the relevant and applicable legislation to the South African public sector.

She boasts with 20 years of extensive experience in dealing with the public sector specialising within the local sphere of government. Over the years, she has demonstrated the ability to achieve targeted goals, capable of creative problem solving, utilisation of critical thinking skills in cooperative governance.

Currently pursuing her PHD in Law and Development, Ms Kaywood is no stranger to the classroom.

She has academically achieved the following qualifications and short courses certificates:

Certificates on the following:

Ms Kaywood brings along with her vast knowledge in the field of Local Government, having been a Senior Researcher at the South African Local Government Association (SALGA) since 2015 before joining the City of uMhlathuze family. She has also made her mark in different government spheres in the following strategic positions:

The City has given Ms Kaywood a clear and concise mandate to ensure that it is well resourced with high skilled personnel, relevant and latest technological systems and equipment for it to be able to be on par with national and international standards to deliver effective and efficient services to the communities.